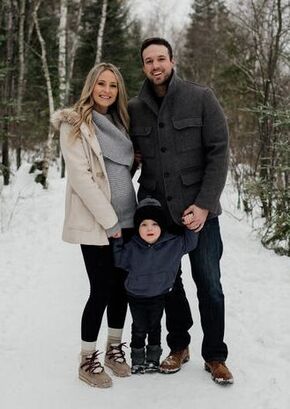 Kyle was born and raised in Kenora, ON. Growing up Kyle played at the AA & AAA levels. Throughout Kyle's playing career, he was fortunate enough to play against some of the countries top players at tournaments such as All Ontario Peewee Championships to the National Midget Championships (Telus Cup). Kyle was also fortunate enough to be invited to prospect and training camps such as the London Knights. He was faced with tough decisions after the Knights camp as NCAA was Kyle's end goal. Choosing to return and finish his U18 career in Kenora to keep his NCAA eligibility, he was able to finish his final season and then sign with the Woodstock Slammers Jr Hockey Club in the MHL (Now Grand Falls Rapids). During Kyle's second season with the Slammers, he was awarded the Defenseman of the Year Award from his team. Kyle also signed a letter of intent to play with the NCAA's Union College Dutchmen who play in the ECAC. During Kyle's third and final season with the Slammers, he was nominated to the leagues First Team All Star Roster. Unfortunately during his final season, things fell through with Union due to high school credits which saw the letter of intent voided. Kyle was able to get another offer from the UPEI Panthers men's hockey program (USports - AUS). Kyle played a short stint with the Panthers and decided to move on from the program. While still attending school at UPEI, Kyle signed with the Corner Brook Royals who play out of the West Coast Sr Hockey League. Being paid a small salary was a great perk of playing with Corner Brook but the travel was a lot each weekend flying from PEI to NFLD. Kyle ultimately made the tough decision to step back from playing competitively and focus on schooling.

During Kyle's time at school, he was fortunate enough to help out as assistant coach with the Holland College Jr B Hockey team. After graduating, Kyle moved out to Red Deer, AB to start his career alongside his wife (Also a former UPEI Panther for the Women's program). In the summer of 2015, Kyle was proposed the idea of moving back to Kenora to purchase the family screen printing and embroidery business (Print Gear Inc.). Kyle and Alysa both decided this was best for them and it saw them headed back east in the fall of 2015. Since then, Kyle jumped on board with the program he grew up playing in, now known as the Kenora U18 AAA Thistles. Kyle spent the next four and a half seasons coaching the U18 program. Kyle took a step back when he and Alysa welcomed their son Bowen into the world.

Kyle continues to play rec league hockey in Kenora and still has a passion for the game. Kyle noticed that he had been asked a lot of questions from both parents and players throughout his coaching years and the years after he stopped coaching. Kyle says in the area, if you don't know hockey people who have been there or played higher than U18, a lot of questions go unanswered or you get misinformation so that is why he has decided to create the Monarch Advisory Group. Kyle plans to be a great resource for his athletes and answer any questions that the athlete and families may have during the process. Kyle will also offer guidance on NCAA prep, training and nutritional programs that are tailored around the athlete to help them achieve their goals of playing at the highest level possible. For players without NCAA eligibility, Kyle can be the "go to" point of contact as the players representative to help place the athlete in an environment that will allow them to excel.

Kyle hopes to be able to make an impact with kids all around Northwestern Ontario and help provide some exposure to the talented players around the area that don't necessarily get the proper exposure that a lot of other programs receive due to the geographical location.