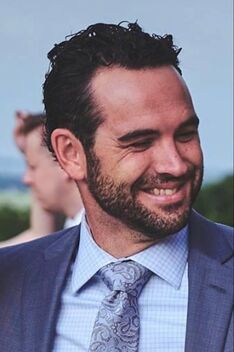 ​Longland grew up in Dunnville, Ontario playing AAA hockey. He played his junior hockey in the Golden Horseshoe Hockey League (now GOJHL) with the St Catherines Falcons and Fort Erie Meteors. He then moved on to the Ontario Provincial Junior Hockey League (now OJHL) captaining the Pickering Panthers. He then committed to the State University of New York at Morrisville in the NCAA.
Longland was a two-sport student-athlete during his time at SUNY Morrisville, competing in men's ice hockey and men’s lacrosse as a defensemen. Longland was a defensive force for the Mustangs during his time, three-times earning NEAC first team All-Conference accolades. He too, assisted in establishing the foundation for the dominating program early on in the decade, as the Mustangs captured three-straight regular season lacrosse titles, including a tournament championship.

Longland holds several top 10 rankings in the all-time season record books for the Mustangs, claiming three spots alone in caused turnovers. He wrapped up his career ranked second all-time in the career records in ground balls (235) and first in caused turnovers (126). Aside from his success on the ice and lacrosse fields, Longland was a vital member of the Mustang community, volunteering his time with the Student-Athlete Advisory Committee (SAAC), serving as President of the student run organization, while excelling in the classroom as well with President's List and Dean's List honors. He was a NEAC Scholar-Athlete throughout his career, SUNYAC Commissioner's List honoree, 4 time All-Academic team member and upon graduation was named the 2012 SUNY Chancellor Scholar-Athlete. During his time at Morrisville, Longland also established a community outreach program called Morrisville Mustang Mentors, involving student-athletes with the local elementary school. He was also named to the All-Decade Men's Lacrosse and Men’s Hockey teams as a defensemen.

Upon the completion of his athletic career  Longland has coached for the Toronto Titans in the GTHL for three seasons. He was then named the Head Coach for the Newmarket Hurricanes Jr A Hockey Club in the OJHL. After relocating, Longland for the past 4 years has been coach for the Thorold Blackhawks Jr B Hockey a club of the GOJHL. Longland has worked with many NHL, NBA, AHL, ECHL, SPHL, OHL, NCAA and amateur athletes with development strategies both on and off ice in the Southern Ontario area.